You are here: Home / Life Adventures / Try Something New – You Know You Wanna 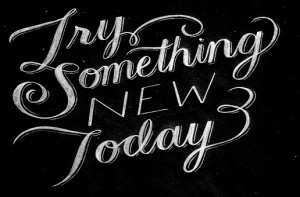 Have you tried anything new lately… Anything at all?

Let me give you some ideas, to get your brain in gear – thinking about trying something new – like:

So now, let me ask you again – “Have you tried anything new lately… Anything at all?”
When was the last time you tried something new for the first time?

Why am I asking – well I’ll tell you…

This week my husband and I are on a bit of an adventure ourselves. We’re visiting our daughter in Windsor for a few days (and yes we’ve done that before – so it’s not new). But what is new is the things that we’re doing
(most of these for me are trying something new…) 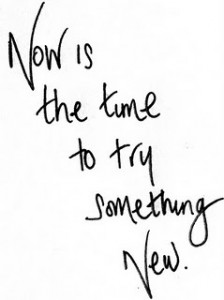 Every once in a while… you need to dare yourself to just try something new.

Step out of your bubble, push past your comfort zone, build more confidence, become more resilient and just do it… with no regrets!

Get out your “Bucket List” or “New Things To Try” list – and if you don’t have one of these lists then start one. Get thinking – get brainstorming – get your list started.. so that you can get out there and try the things that you’ve never tried but have wanted to. Get inspired and be an inspiration too.

Don’t wait until it’s too late…  Now is the time to try something New.

Back over to you… Have you tried anything new lately… Anything at all?
When was the last time you tried something new for the first time?