You are here: Home / Life Adventures / What An Innocent FB Post Taught Me.

This Seemingly Innocent FB Post taught me a lesson today…

Have you ever “Liked” someone’s seemingly innocent FB post? Or have you liked a post/comment that seemed odd or slightly out of character—without really giving it a second thought or asking what the comment was all about? Yup – me too!

And Then This Happened…

I received a Direct Message from the person whose post I “Liked” and this is what it said: (I had to break it into 2 images to screenshot the entire post). 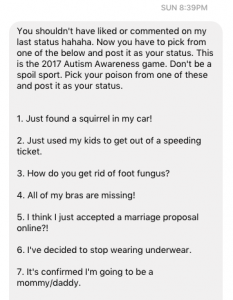 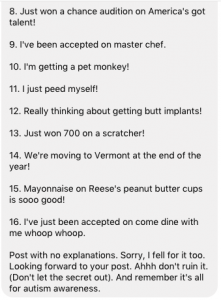 So what do you do? Do you ignore it? Do you play along?

I was slightly confused as to how this was creating “Autism Awareness”, and yet the fact of the matter was:

Whether it was the right or wrong thing to do, or whether it would create the awareness for Autism that people were expecting, I for one did not expect what happened next…

After reading the list of statements to choose from (for making my post), I opted for one that I could potentially see happening one day. I love Food, and I love Cooking, and I love Experimenting with food, so the natural choice was “I’ve been accepted on Master Chef”!

A bold statement and lofty goal for sure, but it was just an innocent post—Right? I closed my phone and didn’t give it a second thought—Until…

This morning, my husband asked me, “What is Master Chef?” I quickly responded by saying “Oh!  Don’t Like that post! It’s a post I made in support of Autism Awareness.” George kind of chuckled, and advised me that my little post (I hadn’t looked at FB yet) had received quite a bit of attention; with people congratulating me, asking me what episode I’ll be in, what I prepared at the audition, and so much more!

Just listening to some of the comments (for which I later read – every single one of them), I was beginning to feel a little overwhelmed, and wondering what in the heck I had just done! Although we laughed at the situation I managed to put myself in—deep down, I wasn’t feeling so great, or thinking it was so funny! I seriously had no clue as to how I was going to respond. I didn’t think that an innocent post would garner so much attention. And I certainly was not going to direct message 100+ people to give them the “Rules of Play” of this “2017 Autism Awareness Game” !

I tried to put it out of my mind for just a little, while we got on with our morning Yoga & Meditation routine. But then my phone started ringing, and a message popped up on my phone asking for an interview (my phone was Air-Playing my Fitstar Yoga App at the time). All I could think was OMG – this is getting out of hand – what in the world am I going to do? And to top it off, I think I’m in need of another Meditation session (with some serious deep breathing).

Over another espresso, we discussed the situation further, to help me determine how to handle the odd predicament I had gotten myself into. What would be the best way for me to respond?

After deliberating on what to say, and taking the time to write this post (in retrospect – there may have been a better way to handle the situation and more details I could have shared), I’m personally still in awe as to the number of responses I received on a single post.

This innocent post taught me a few lessons today…

What else did I take away from today:

As individuals, and as community members; we need to take a greater responsibility for what we openly share on Social Media. We need to ask ourselves some questions before we post:

It’s okay to say NO!

It’s okay not to comply with the so-called set out “Rules of Play”!

I’ve seen this posted several times lately on Facebook by some of my Friends, and I think it’s something that I’ll be posting too:

I don’t want to offend anyone and appreciate your sentiments and pure intentions, but I would appreciate not being sent any more chain messages via Messenger. I have not forwarded any of them on.

Not only do they consume a lot of time, they eat up data and can be destructive. I no longer forward any of them.

Thank you for reading. Your understanding is appreciated!

Although, what happened to me was not a chain message—it would have been a very time-consuming task to Message back every person that “Liked, Commented, or Shared” my post, had I followed the “Rules of Play”.

Sadly, this whole ordeal has still taken up a greater part of my day than I’d like to admit. And yet I’m smiling, and breathing much easier than I was earlier this morning. Why is that you ask? Because through it all I have discovered that whether it was the right or wrong thing to do… in the end, only I can make it right!

My innocent post: “I’ve been accepted on Master Chef” was meant to generate “Autism Awareness” – so here we go!

Here’s a few interesting facts about Autism (that you may or may not know):

There’s so much we all can learn about Autism Spectrum Disorder.

Today was an eye-opening day. Who knew that my day would be filled with so many lessons transpiring from sharing what I thought was a single, simple, innocent Facebook post!

How about you – have you been caught in a similar situation that you’ve felt compelled to respond to?