You are here: Home / Life Adventures / A Song Can Say So Much… 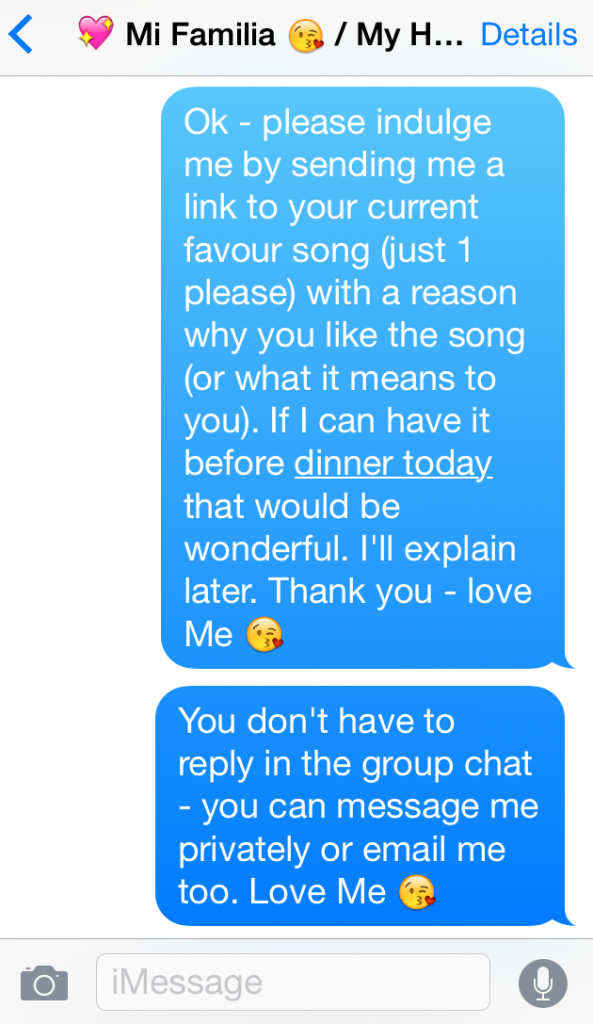 Do you enjoy listening to music… and do you actually listen to the words of the songs too?

I do – I tend to be more into the words myself, although the music needs to compliment the song of course.

I believe that a song can say so much more than what we initially hear – how about you?

So today I asked my family the following:

Well my daughter Kasandra was the first to respond (maybe because she lives at home, and new what I was up to) – she replied rather quickly I might add with ‘Taylor Swift’s – Blank Space‘ and her reason… “Because it’s me 🙂 ”

If you happen to watch the video – don’t judge her by it please – as she really isn’t like this at all – but you have to admit the song is pretty catchy! Just Listen to the words…

Truth be told – she had heard the song only just today and it hit a chord with her (excuse the pun) so she shared it with us at lunch (which gave me the idea for this post).

Truth be told – he wants this song played at his funeral – he has said this to me countless times over the course of our 26 years together – it’s really no secret that it’s one of his most faved songs – and artists for that matter too. He’s always been partial to a powerful voice and songs with depth and meaning. Not everyone listens to the words – often people are attracted to the music rather than the lyrics (I always listen to the words).

My daughter Kelsy emailed me to say…  “I have two, lol” – of course she does – and when I asked her to pick just one – her response was… “No idea, lol. Do it for me” – kids these days. Her two picks were:

And her reasoning for her choices… “In both cases I find them empowering and they can bring my mood up and help me feel strong again. Love you!” Empowering songs are always a good choice in my books – listen to what’s going to make you feel stronger.

My son George was the last to respond via the group message (he and his sister Kelsy both needed a reminder), and he also sent me 2 choices. What is it with “not” following instructions – The kids that are away from home are either sitting on the fence or didn’t read the message – lol.

So Georgie’s picks were:
‘Dear Boy‘ or ‘Liar Liar‘ – both by Avicii – and his reasoning for his picks… “because they get me going at the gym” – you’ve got to have good tunes to workout too – makes it easier to have a more powerful workout.

So now I guess it’s my turn… and I’ve had the longest to ponder on this one – yet I have no idea what my favourite song is either. There are far too many to choose from.

And – My reasoning for this choice… well words are not always needed between my husband and I. Often it’s the unspoken words that have more meaning to me and touch my heart when it matters most…  just like the song says… the smile on his face – the truth in his eyes – the touch of his hand – yup – he says it best when he says nothing at all – he’s my best friend 🙂

What’s one of your favourite songs – and what’s your reasoning for your choice?